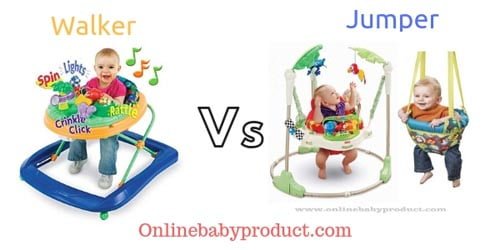 Babies were dependent for movement or paying until there have been some unique devices for them. A baby walker and baby jumper are both the devices which help infants and sometimes toddlers for movements along with playing. 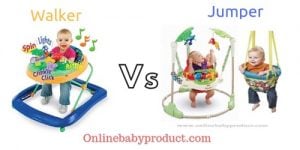 Let’s take a look whether a baby walker or a jumper which one is seeking attention to the parents. A hoop supported by an elastic strap which helps the infants to play inside the hole is what a jumper does. More precisely a jumper has a foundation made of solid plastic and space to infants to place their legs with two holes. On the other hand, a walker will help the infant to move from one place to another without any kind of support.  A hard plastic base and leg holes for the infants to sit in a wheeled device and sometimes playing in it is a baby walker.

When parents are looking for a device for their babies the first thing strike on their mind is it is advisable and safe for the babies to get adapted. Baby walker is a wheeled device and this the basic difference between a walker and a jumper. However, parents are mostly concerned about the wheel because an infant has no balance on their own and they might go in a wrong direction with a wheeled device. A baby jumper is pretty safe because babies can’t move to places.

To some extent, not every house is a spacious one. So it gets monotonous for an infant to move round and round in one place. On the top of it, a baby walker is impossible to move in a room with carpet on the floor. An infant’s crawling to the walking stage is the most special part of parents. But in some cases, parents are not always there to look after every single move of a child. Therefore, chances are high for accidents on a walker.

Likewise, a jumper signifies an infant how to jump. Babies get used to depending on the device and they form a tendency to move in a clumsy way. Despite a jumper is a useful thing for babies but before using those parents have to be aware of its pros and cons.

Noted things for parents check the area where their kids are going to ride the walker or the jumper. Especially, strictly advised to be extra careful with stairs. Home decorating pieces of stuff, edgy furniture, and electronic devices are also the things which should be moved.

For parents, it’s hard to decide whether they should go with a walker or a jumper. Sometimes a child enjoys a jumper but walkers are also equally popular. Doctors say that an infant must be able to stand on feet for few seconds then it’s better to try such devices.

Above all, too much dependency on an artificial device is not good for a child. Surveys say that child lose their natural growth while using jumpers or walkers. Many countries have banned those devices. However, a Jumper or a Walker will remain a topic to be considered as these both are running successfully.

Buy Your desired baby product with care and love. Give your baby a nice childhood.